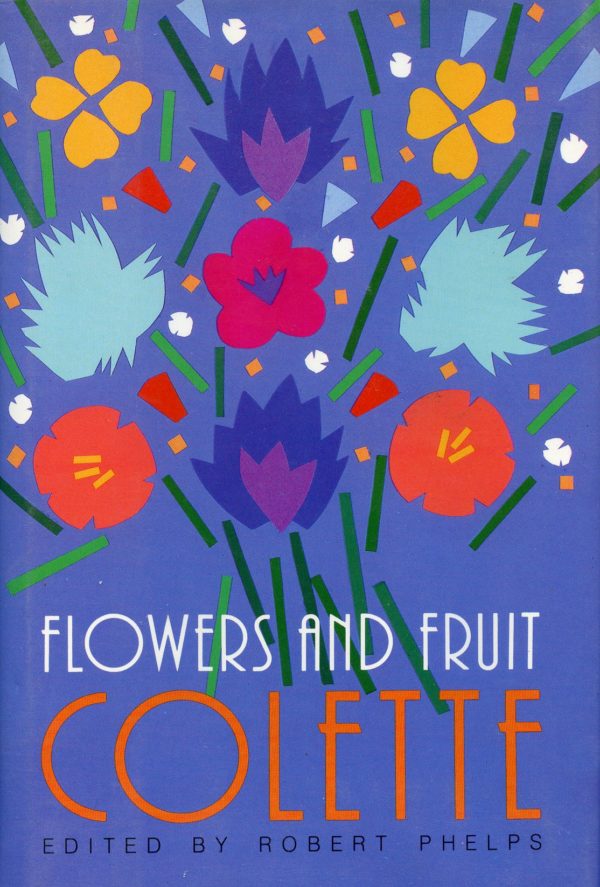 Essays on Gardening and flowers by Colette

o one has written better about gardens than Colette. Her mother, Sido, gardened passionately above and below their house at Saint-Sauveur-en-Puisaye. Colette, her youngest child, was left to moon and dawdle around the plants as much as she liked. Plants were her earliest and most faithful companions; she looked into them as deep and hard as only a child can, and she never forgot what she learned. Of each she remembered the mode and the imprint, as well as the way it behaved in garden society. The gardens she liked least were the ones she herself had to make from scratch; she entered fully into the atmosphere of gardens already existing, complete with their animals and insects. Each crumbling wall, with its rampant stragglers and tangled blooms attended by ragged butterflies, worked its way into her memory.

Gardens were central to her creative method; her novel ”La Retraite Sentimentale,” for example, uses Annie’s garden, Casamene, as its objective correlative. Casamene was based on Les Monts-Boucons, the farmhouse in the Jura that her husband Willy bought in 1900; at the end of her life Colette still vividly remembered its ”old fruit trees, cherries and mirabelles; thick walls, impetuous wood fires, dry, crackling bowers.” The precious moments for Colette were not those of the full flush, but the budding and the fading, full of promise or regret.

It is with a special joy, therefore, that one welcomes the gallant enterprise of Farrar, Straus & Giroux in presenting a collection of Colette’s writing about plants, chosen by Robert Phelps, who has edited and translated several of Colette’s works, for translation by Matthew Ward. The central figure in ”Flowers and Fruit” is Colette herself, not through her own egotism, but by the intensity of the attention she brings to her fragile subjects. Beached by the ravages of arthritis on the divan in her flat overlooking the Palais-Royal in Paris, she turns her long cat-eyes on the flowers that she will never see in their natural state and sings their elegy instead of her own.

Matthew Ward renders this: ”O my well-padded little city-dweller, my thanks to you for standing in for what I do not and henceforth will not ever have – that blue forest flourish, spontaneous and fragile, in numbers great enough for me to draw from it the illusion that I was standing on the edge of a lake or a field of blue flax in flower.”

This confusion of singular and plural, past and present, gobstopped with auxiliary verbs, is a graceless version of a limpid original. Matthew Ward is not to be judged too harshly for being totally unequal to the task; even a stylist like Antonia White, whose translations of Colette are among the best things she ever wrote, would find the seamless, shining compression of Colette’s style in these late essays nearly impossible to render.

The backbone of ”Flowers and Fruit” is the series of essays Colette wrote in response to a suggestion by the Swiss publisher H.-L. Mermod in 1947 (when she was already 74) that he should regularly send her flowers and she would write on each consignment for a volume in his ”Collection du Bouquet,” eventually titled ”Pour un Herbier.” To these Robert Phelps has added as many pages again of odds and ends in no kind of sequence, ending with the long essay ”Flore et Pomone,” published in Nazi-occupied Paris in 1943. It is perhaps pedantic of me to regret that Mr. Phelps has not taken his duties as editor more seriously. To have prefaced the volume with a properly researched essay on Colette’s gardens and her knowledge of botany might have been to overbalance it, if the translations had been anything like as light as the originals. As it is we are left not only with rather groping translations but with undetected errors, gross in the case of Mr. Ward, fascinating in the case of Colette.

One essay, ”Medicinals,” is a particularly interesting mare’s nest. Colette recounts what she learned as a child from the old women of the Puisaye who knitted while they ”herborized.” She is convinced that their plant lore was full of quaint errors, one of which she repeats from an earlier essay ”Fetidite,” translated here as ”Foetida,” where she writes of ”la chelidoine dite herbe-a-seins [ the celandine, called breast-herb ] par corruption ‘clair-bassin’ [ corrupted into ‘clear-pelvis’ ] .” Chelidonium majus, the greater celandine, has no place among the dozens of herbs used in treating afflictions of the breast. It is, however, useful in clearing obstructions of the liver and kidneys; its sister, Ranunculus repens, is the true ”clair-bassin,” i.e. remover of pelvic congestion. There is no ”herbe-a-seins”; the term is Colette’s own mistaken coinage.

Colette’s assumption about the corruption of ”herbe-a-seins” to ”clair-bassin” is not only wrong, but untranslatable. Mr. Ward takes refuge in gobbledygook; from him we learn that the old herb-gatherer of Colette’s youth, La Varenne, confused ”titterwort for tetterwort.” Tetterwort is one of the names of the celandine, so called because it was thought to cure tetters (skin lesions); titterwort, like ”herbe-a-seins,” does not exist, but Mr. Ward makes it La Varenne’s coinage instead of Colette’s.

La Varenne identifies a ”little red berry” as ”one of the Morellos [ a type of cherry ] ” in Mr. Ward’s English; in Colette’s French she says, ”La petite cerise, c’est de la morelle,” which in my French anyway means, ”The little cherry, that’s nightshade” – rather different. ONE of the most fascinating aspects of peasant lore is the ubiquity of certain associations across the boundaries of languages and even language groups. You might think that Mr. Ward, being a linguist, would rejoice that the English for ”bourse-a-pasteur” is ”shepherd’s purse,” and that the Latin is Capsella bursa-pastoris; but no, he translates it, evidently to underline the already perfectly understood parallel between the shepherd’s scrip and his scrotum, as ”shepherd’s-sac.”

Encrusted as this light and ironic essay is with mess of Mr. Ward’s making, it is not easy to follow Colette’s shimmering play of tone, for though she might claim to be highly skeptical of the old herb-gatherer La Varenne, she remembers what she was told with remarkable vividness, not unaided, one suspects, by the herbals that lived by her daybed. (A little research culminating in an elegant footnote could have established which ones.) Would not readers like to know that when Colette dismisses ”so many witches’ herbs” she is probably wrong, in that ”herbe-aux-sorcieres” is just one – enchanters’ nightshade or Circaea lutetiana?

Perhaps what I really wanted (and truth to say expected) was a Colette gardening omnibus. What I got instead is an elegant little book designed by Jacqueline Schuman, who must also be responsible for the graceful line drawings with which it is embellished. It is a pity that neither Mr. Phelps nor Mr. Ward shares her sense of style